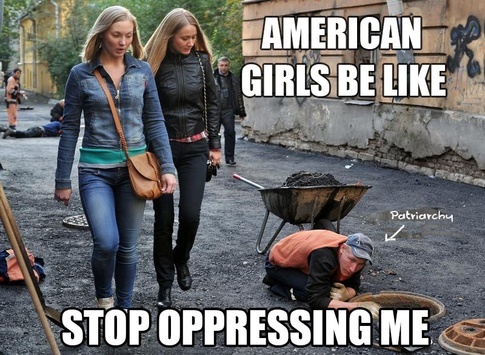 Ultimately, people who think that feminism isn’t needed are wrong.

Of course I think that, I’m a non-binary AFAB feminine-presenting and female-passing person; in the words of Caitlin Moran: “Do you have a vagina? Do you want to be in control of it? …Congratulations, you’re a feminist!”…so OF COURSE I’m a feminist! It’s only logical, right?

Or is this really it? Is it really this simple? Is everyone who claims to be calling for justice really just advocating for themselves?

If you are part of the third wave of internet feminism happening for the past few years, you’ll know there’s a heavy emphasis AGAINST this above mindset. It’s called intersectionality, the idea that if you support one social justice cause, you’re kind of a hypocrite if you don’t support all of the others. (Notably, this term wasn’t coined by people like Caitlyn Moran, but by the American professor Kimberlé Crenshaw in 1989, one of many black women who found themselves torn between a sexist civil rights movement, and a racist women’s rights movement.)

For outsiders however, this has the effect of appearing like a slippery slope of shaming and counter shaming: “if you’re not with us, you’re against us” etc; creating a never-ending pile of demands and conditions that simply must be met unless you are No True Feminist TM.

And even with the clearest mind, anyone who only experiences one aspect of social injustice clearly is tempted to see intersectionality in this overwhelming and impossible and irrelevant task too; “I just want to own my vagina, what do you mean I have to care about #BlackLivesMatter TOO?!”

But actually, the internal logic is crystal clear: for example if you are a white cis heterosexual middle-class able-bodied conventionally-attractive woman, and you only care about the one aspect of your personality where you are discriminated against, you’re erasing a lot of other people’s struggles comparative to you in other aspects of your identity, and pretending there is a level playing field outside of gender. Hence the baying crowds of redditor MRA’s (aka The Horde) who like to pit imaginary straw feminists who are wealthy, white, able-bodied and free against straw victims in the form of homeless black war veterans being accused of being privileged.

Keeping intersectionality in mind is the antidote to spreading this kind of ignorance, and actually, it’s the key to being better at ANY social justice.

“The Horde” are right, but also, so wrong.

So the Horde is that overwhelming presence on the net, populating and driving humour websites like 4chan, reddit, imgr, all the way down to more trash sites like funnyjunk and 9gag. It’s made up of that recognisable stench of self-righteous political apathy that still somehow manages to be pretty darn political in its own right, like South Park and Family Guy, and more concerningly, major motion pictures like American Pie and anything starring Seth Rogan. They are overwhelmingly male, white, straight, cis, abled bodied, etc, and essentially face little institutional prejudice as a whole community.*

Yet nonetheless they see entire communities about institutional prejudice, and feel, somewhat…left out? Tumblr In Action is a subreddit with nearly quarter of a million subscribers, on a platform with a primarily Horde mentality. I promise you now, that I can predict exactly what you will find if you are to visit it in the next five minutes. With depressing certainty, lurking at the top of the comment cesspit beneath someone’s grassroot feminist campaign against the latest tyrannical dress code, will be an impassioned plea to “please, just for once, why can’t we think of the REAL victims, the homeless men!”. I promise you.

Now that sounds dismissive, doesn’t it? When I describe the inevitability of discussions about homelessness, I sound like a shitty and ignorant person. I sound like exactly the kind of ignorant “first world” (there are PLENTY of third world feminists) feminist that they are talking about. Homelessness IS a real and legitimate problem. I sound shit for complaining about how they talk about. No wonder they feel big and important and self righteous for constantly pointing it out.

But the irony is, that in using this problem only as a blugeon against what they view as smaller problems, because they hate righteousness and anyway they are the winners at righteousness anyway so there, is that they contribute to the marginalisation of capitalism as a social justice dialogue. Classism and poverty are often ignored or marginalised by the mainstream social justice movement, in favour of more partisan questions like feminism that are more obviously unfair and more clearly discriminatory, at least to the people who experience it.

And that’s the key. The pervasive nature of capitalism and it’s saturation in the media. It’s hiding in plain sight, and because it’s always there, few people notice its presence in a meaningful social justice narrative. It’s like a force of nature, like rape culture is to women, but there is no clear absence to compare it to. The rich aren’t absent from it, they are just those who manage to escape it, through whatever means. If it’s meritocratic then, and fair in a sense, why fight it? And even if it wasn’t fair, what alternative would there be?

The Commies Are Right

There’s a growing community of semi-ironic communists amongst social justice circles, using the word comrade and waiting for the inevitable and eventual heroic uprising of the working class and the socialist utopia. It looks like a joke, but for many, it’s a genuine conviction that there must be a better way than the current capitalist system. And they’re not all naive idiots either; speak to any serious communist and you’ll find they have answers for everything (Russia wasn’t real capitalism so it doesn’t count!). They may sound like excuses, but these answers do actually reflect the teachings of communist forefather Karl Marx, from whom Marxist Communists take their name.

It’s no coincidence that most, if not literally all, of these communist sympathsisers are also everything else the Horde hates. They are feminists, and environmentalists, and pro-LGBT+ rights, and anti-racists, and anti-imperialists. Because it comes back to practising intersectionality; if women’s problems are real, then so are people of colour’s problems, and lgbt+ people’s, and disabled people’s, etcetera. And if you look at all of these problems, together, in a disgusting mishmash of oppression, underestimation and devaluation, the “real” problem becomes depressingly clear.

When people are valued as things for productivity, it creates all the inequalities we see in society**. There are huge numbers of homeless people, but they are disproportionately made up of those who are disadvantaged in other ways: the mentally ill, the addicts, LGBT youth, etc. And if you back up a little into the figures for unemployment data, it becomes even more obvious on a larger scale, with the wage gaps against people of colour and people assigned female.

Countries colonised by European powers were valued for their riches and their people were dehumanised, women lost their rights as feudalism began and their wombs became more valuable than their humanity, disabled people suffer socially and practically for being seen as extraneous to a society built on productivity, and even the most basic Horde-level labourer faces constant fears of utter dehabilitation if they fail to be lucky enough and productive enough to “earn” their living.

So yes, homeless men are the real problem, insofar as they are reflective of the ONLY real problem in society, and that is valuing people only so much as they contribute to a one-size-fits-nearly-none orientated capitalist society. Capitalism’s tyranny affects us all, and this can either keep us silent about all the other ways disadvantage manifests within it, or it can be the SOLUTION to joining together against a cohesive force. We are not things, we are human beings, and we ALL deserve more than this.

(*And even if individuals are black, female, trans, gay, etc, they are very rarely more than one of these things, and almost never understand the concept of internalised prejudice. More on that later.)
(**It’s actually the inspiration for my love of my blog avatar image, “We Are Not Things” from the miraculously both popular and feminist capitalist dystopia film Mad Max Fury Road.)